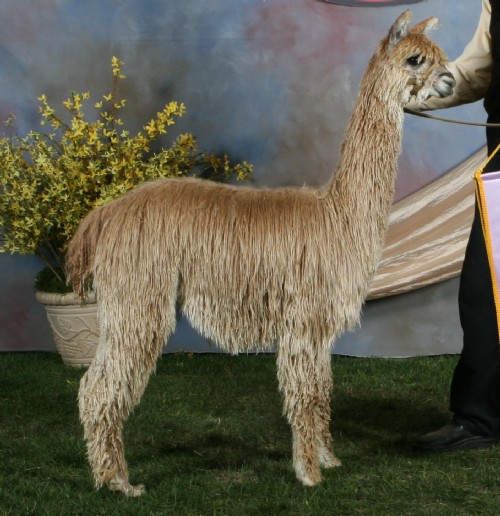 Ask a question
Details
Breathtakingly BEAUTIFUL is the best way to describe this stud! In fact, his luster was so bright when he was born that we registered him as a Light Fawn but he has always shown in the Medium Fawn Class because he is truly Medium Fawn at the skin. We are pleased to co-own him with Chuck and Ashley of Arcadia Hollow Alpacas in Maryland.

We all knew from the time Vinny was a little guy with blinding luster that he was destined for greatness. So we were not surprised but rather thrilled to have him named Reserve Champion Fawn Suri Male at one of his first shows, the 2008 Futurity ... and he was just six months old ... and it was one of the most experienced judges in the industry ... and there were 36 fawn alpacas in contention!

We had a skin biopsy done on Vincentio in the spring of 2009 and were ecstatic with the results. The consistency in his blanket is simply fantastic and he passes that on to his progeny. Vinny has the kind of fleece that you just can't keep your hands off - he'll stand next to us in a pasture and I just want to sink my fingers in to that slippery, soft, dense fleece.

If you want to add superior genetics, blinding luster, and independent, dense locks to your herd - there is no question, you need to breed to Our Stud Vinny! Contact us at either farm - a Suri Farm or Arcadia Hollow for more details.
Awards